The taming power of the small

Today, I would like to speak out about two of my great passions: the ocean and philosophy. Perhaps, some of you might think that one topic is not related to the other, but we need to paid attention to what surrounds us to realize that it really does. The way human beings and animals -including those that inhabit the ocean- face the world is closely linked to the natural environment, and undoubtedly the role that each of us play in that complex network of interdependent relationships contribute to sustain live in our wonderful planet.
More than 3000 years ago, Chinese philosophy already noted these aspects from a philosophical point of view. Hexagram 9 of chinese book “i-ching” tells that “exists a constellation where a strong element is restrained for a certain time by a weak element; it is only through softness and gentleness that such a situation can be accompanied by success.” Although it might seem strange, this statement is perfect to speak about marine plankton, because thanks to the kindness of these microorganisms, life on Earth has been able to succeed.

The word plankton (from the Greek πλαγκτόν [plankton]) means ‘what is drifting’ and is used in oceanography to define the small creatures that live in suspension in the seawater and move thanks to the power of the ocean currents. Their proliferation is closely linked to the conditions of light, temperature, salinity and nutrients in the seawater, meaning that any particular change in these environmental factors rapidly determines life and death of these small creatures. 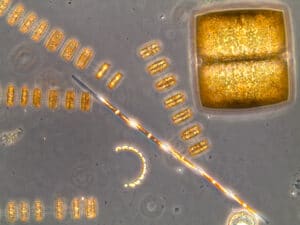 Nevertheless, the profound study of these microorganisms by the marine scientific community results from the fact that human life is intimately linked to their existence. Due to their ability to make the photosynthesis, they are one of the largest providers of oxygen on the planet, higher than that produced by all forests and plants together. In addition, plankton have the ability to regulate the Earth´s climate, absorbing huge amounts of CO2 present in the atmosphere. And last but not least, these microscopic organisms constitute the base of the marine food chain; we could really say that without plankton there would be no whales! 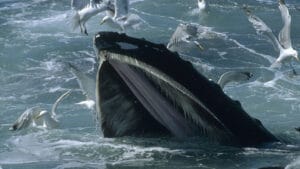 When I began to work on projects related with plankton, I discovered that the first plankton study carried out in Galicia dated back to 1903. This huge database was published in a marvellous book entitled “The mysteries of nature: research on the microplankton of the Ría de Arosa”. It is one of the best existing works to date, and to my surprise, it was made by the passion of a galician doctor who, at the end of the 19th century, spend time and effort to publish the largest catalog of microplankton in the Galician Rías, with those wonderful drawings that showed these invisible creatures to Galician people for the first time. 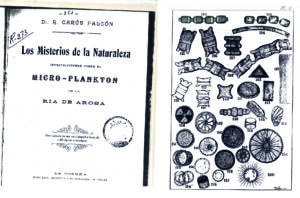 Cover of the book by Dr. R. Carús-Falcón showing the cover and one of the plates with the illustrations of microplankton (plate 7).

Thanks to his reading, I discovered the passion to learn just by the fact of learning, and I really understand what Carús wrote in his wonderful book: “…such beings seem to have played, however, a very interesting role in the origin of the Earth, in the constitution of the species, entailing in our days a vast and intricate field of observation, always new, for the scrutinized gaze of the investigator who vehemently longs to penetrate the hidden arcane of Nature, goes deep and clarify as much as possible the obscure concepts of the origin, of the succession, of the morphology and biology of the infinitely small organic world, and that of higher beings related to it”.

From that moment I knew that I was lucky enough to work in a wonderful field and that, if I could, I would dedicate my scientific life to study these wonderful criatures to be able to show them to people, and to explain that, as hexagram 9 said, only through the kindness of the weak and small can be achieved the success of a constellation.